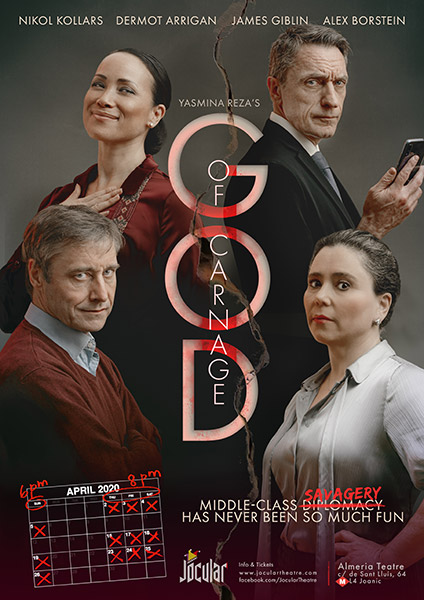 Winner of the 2009 Tony Award for Best Play, God of Carnage relates an evening in the lives of two couples, residents of a tiny Brooklyn neighborhood, who meet to discuss a playground incident. Alan and Annette’s son hit Michael and Veronica’s son in the face with a stick, resulting in two broken teeth. The evening begins quite amicably, with apple and pear clafoutis, and the four parents intending to resolve the situation diplomatically. However, as their hopes for this begin to splinter and disillusionment sets in, the evening deteriorates from one of mild unease and discomfort, into a deluge of accusations, recriminations, jealousy and rage. There is drinking, fighting, vomiting and the destruction of some rather lovely tulips. Boys will be boys, but can the grown‐ups be grown up enough to resolve their differences without losing sight of right and wrong? The façade of civility shatters as the God of Carnage wreaks havoc in the living room and all hell breaks loose.